30 years since the publication of Morals, reason and animals

It’s 30 years now since the publication of Morals, reason and animals, the classic by Steve F. Sapontzis, which was published in July, 1987,[1] and was one of the first contemporary animal ethics works that examined the question of acting to aid animals in the wild.

Various authors have written about speciesism, and many people may have heard of Peter Singer or Tom Regan. But the truth is that there are a number of people who have not become so well known but have nevertheless made a very remarkable contribution to animal ethics throughout their lives. Several names could be mentioned here. In particular, we could cite philosophers Evelyn Pluhar[2] or Paola Cavalieri.[3]

But someone else who absolutely needs to be on the list is Steve Sapontzis.

Sapontzis, emeritus professor of philosophy at California State University, has written a large number of papers on the subject of speciesism (a list of some of his publications may be found here). He was also the co-founder in 1984 of Between the Species, the main journal about animals and philosophy which remains active today. To know more about Sapontzis’ views, you can read an interview with him here.[4] 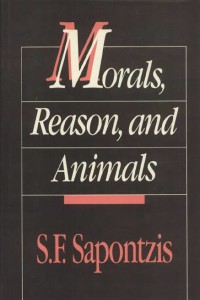 One of the most important animal ethics books in the 80s

During the 1980s, a few books were written that were quite important, primarily, for example, Animal rights and human morality by Bernard Rollin (published in 1981)[5] or later, The case for animal rights by Tom Regan (published in 1983).[6] Morals, reason and animals must also be cited as one of the most original among them, one of the most important books published about speciesism and the moral consideration of nonhuman animals. In fact, it was a groundbreaking work in its time.

The title of the book is quite descriptive in terms of content. The book addresses the question of whether we should give moral consideration to animals and whether the ability to reason is a motive for considering that someone’s interests deserve more attention. But it does not address this question purely in a general and abstract sense, but also examines the practical consequences that might follow from it.

The book is very comprehensive and addresses many different issues. An index of its contents can be found here. But several points in particular can be highlighted. Morals, reason and animals argues extensively against the idea that those with a higher capacity to reason should be considered more important. It also claims that, contrary to what some people think, aiding animals in nature is the right thing to do in all those cases where it is feasible to do it without further harming other animals. It also explains in detail why respect for animals can be defended from any of the most accepted ethical positions.

Why being “rational” is not what should grant moral consideration

A common way of defending the moral priority of human beings over other sentient beings is by saying that humans have higher cognitive abilities. Sapontzis argues why this view, widespread as it is, is wrong.

Having a certain intelligence may mean that in certain cases we can suffer harm, if something happens that causes us significant psychological suffering. For example, if we want to study and to learn about a particular issue or subject, and we are prevented from doing so, it can cause us to suffer. Likewise, something may cause us to suffer in certain circumstances if we anticipate that we are going to experience some harm. But having those cognitive capacities is not what makes us able to suffer, sentience is. But in many other circumstances all this is irrelevant. If we burn our hand, the pain we suffer is not greater if we are more intelligent. Moreover, in other cases, having those capacities can make us suffer less. If someone captures us and causes us pain, we will suffer even more if we do not understand what is going on. We may even fear we are going to be killed, even if the ones who have held us just want to help us by giving us veterinary treatment.

All this shows that sentience, rather than reason, is what should count when it comes to respecting someone.

Intervening to help animals in nature

Sapontzis then examines the question of whether we should help animals that are in situations of need in nature. There is a view that many people still hold, although their number is gradually decreasing, according to which we do not need to worry about this. There are even those who maintain that the idea of ​​intervening to prevent animals from suffering in the world is crazy or absurd, and so is antispeciesism.

What Sapontzis argues is that such an idea, despite being considered absurd by some people (in particular by some of those who advocate ecologist positions) is not so at all. Sapontzis indicates that if we can help someone in need, there is no reason not to do it. And he points out that this is so even when there is a conflict between different animals, so that whatever our decision is, there will be some who are in a worse situation.

Sapontzis argues that in such a situation what has to be done is not to ignore the question, but to make the best decision for the animals. What this assumes is that acting in favor of animals is not only justified, but is also something positive, and that we should do it as long as it does not cause greater harm. There are many cases in which this is not possible and therefore we should not act (as doing so would cause greater harm to one or more others). But there are many cases in which it is possible to intervene without causing greater harm, and in those cases the correct thing is to act effectively (his arguments on this point were already anticipated in a previous article of 1984).[7]

For this very reason, Sapontzis was particularly concerned with distinguishing the antispeciesist point of view and its consequences from the positions of ecologists. Sapontzis argues that we should support the former, and not the latter, because what is relevant in the decision to respect someone is nothing more than their capacity to suffer and enjoy.

Sapontzis’s attention to the topic of helping animals in nature is very significant. It contrasts with the treatment previously given to the subject by others like Regan and Singer, which was limited and unsatisfactory (although this has already begun to change, as Singer now considers the subject to be very important, having already written and spoken about it).[8] We might think that perhaps Sapontzis was the first to deal with this question, but in fact this is not the case, since more than a century and a half ago it had already been addressed by Lewis Gompertz, one of the first vegans known to history who was also an advocate of antispeciesism long before this term had been introduced.[9]

But there is no doubt that, aside from this, Sapontzis was one of the people who urged the discussion of the situation of animals in the wild through his work.

We must respect animals regardless of what ethical position we hold

Finally, another point Sapontzis dealt with is the fact that in ethics various points of view are put forward. So, Sapontzis poses the following question, does defending animals imply accepting any particular ethical theory? And he explains the reasons why the answer is negative. We can advocate respect for all sentient animals and reject speciesism, regardless of a particular ethical position that we may accept.

For these and other reasons, we recommend that all of you who have an interest in the philosophy of antispeciesism read this book. To be sure, the problems addressed by Sapontzis have been discussed quite fully over the years so that, these days, they are not so novel. But they were in their day, three decades ago now. This is therefore a good occasion to celebrate the publication of this book.

[4] The interview can be seen at Web Archive even if The Abolitionist Online, the journal where it was published, is no longer online.