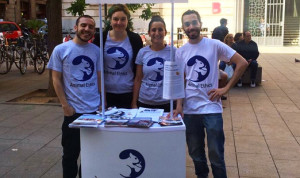 During the last few months, Animal Ethics has been carrying out many outreach activities. We have been leafleting and tabling regularly spreading the word about respect for all sentient beings in different countries.

In April, Animal Ethics tabled at the Texas VegFest in Austin, and made lots of new friends and colleagues interested in helping us in surrounding cities and as far away as Houston. On May 1, we were also present at San Francisco Bayview & Dogpatch Sunday Streets event. During the next few months we plan to be tabling at other events in the San Francisco Area and Texas. 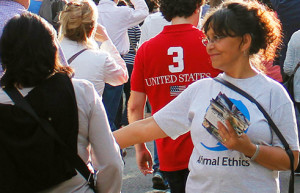 In addition, we have given several talks. In March, Animal Ethics activist Theo Summer spoke at the 35th Annual Public Interest Environmental Law Conference at the University of Oregon as part of a panel discussing the legal and moral issues related to killing animals of one species to preserve another species. Theo spoke about the issue from an ethical perspective, while other panelists addressed it from legal and practical perspectives.

In April, activist Oscar Horta participated in the Effective Altruism Symposium that took place at Birmingham, in the UK. We were also at the Sentience Conference organized by Sentience Politics in Berlin.

In addition, during the last month we carried out several talks in Spain, in the cities of Madrid, Santiago, and Vigo. They were given by several Animal Ethics activists, including philosophers Catia Faria and Eze Paez, and animal lawyer Daniel Dorado. We will soon be giving some talks in Latin America.

With these events, a growing number of people are getting in touch with the idea that we shouldn’t discriminate against other animals. If you want to help us spread the word, just get in touch with us!