Is eating dog or cat for Christmas dinner worse than Christmas goose? 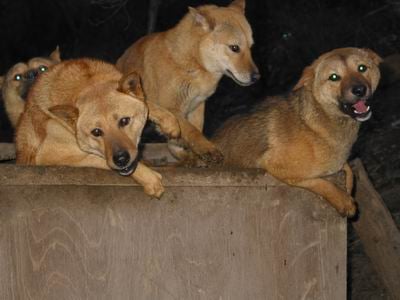 There has been much recent media attention about the fact that a small part of the population in Switzerland is consuming dog and cat meat.1 The sale of these animals for their flesh is illegal, but it is legal to eat domesticated animals if they are killed “humanely.” Cat flesh is traditionally served on Christmas, while dog flesh is sometimes served to treat rheumatism. A petition started by animal rights organization SOS Chats has been collecting signatures demanding parliament ban the practice of cat and dog consumption.

Some of the residents who use these animals for food are indignant about these protests. “There’s nothing odd about it,” one farmer in the Rhine Valley told The Local,2 an English language European news network. “Meat is meat.”

Other countries have received negative media attention for eating cat and dog meat in the past. China’s dog-eating festival has faced criticism, as has Korea’s consumption of nureongi, dogs raised to be eaten. As in Switzerland, it is illegal in Korea to slaughter and sell the flesh of dogs for commercial purposes. However, there is no specific ban on the non-commercial slaughter of them for food. Even the ban on the commercial sale of dog meat is not strictly enforced.3

While the Swiss consume “pet” or stray animals, the Korean nureongi are specifically bred for consumption and are not kept as “pets”. They are considered to be different from the household dogs Koreans love and care for (and do not eat).4 This livestock breed has no scientific name, but the informal term nureongi means “yellow one”. Another slang term for them is ddong-gae or “shit dogs”, after the fact that they eat feces. They are considered to be mongrels and are not allowed inside the home. In contrast, “pet” dogs are referred to using the more honorific word of Chinese origin: gyeon.

The Swiss, Chinese, and Korean people eating these animals have been harshly criticized by people outside their cultures. But why is killing and consuming millions of other animals such as cows, pigs, and chickens considered acceptable? Why does artificially inseminating a milking cow on a farm, then killing her baby for veal not cause public outrage? It is easy to look down on the practices of other countries, but such criticisms distract us from examining the ethical issues surrounding our own practices.

If we are to reject speciesism, then we must respect all animals. There is no morally justifiable reason that a cat or dog should be respected more than a chicken or fish. Just as the distinction between the pet gyeon and the consumable nureongi is arbitrary, the distinction throughout most of the western world dividing livestock animals from others is also arbitrary. Cats and dogs are given special treatment in many places because their cultures regard them as pets. What many people do not think about is the fact that sentient animals have the capacity to suffer and feel joy, and no matter the species, are harmed when we breed them and kill them for food. If we are horrified at the fact that Koreans breed a class of so-called “meat dogs”, or that the Swiss consume cat and dog flesh, then we should also question the horrors of eating all meat and animal products.