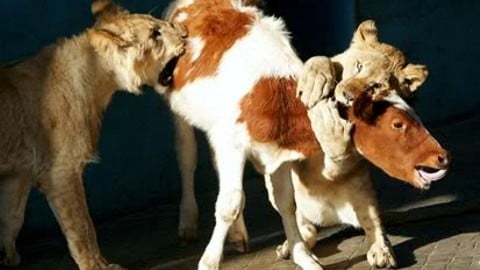 In June, a video circulating the internet showing a cat being thrown into a crocodile-infested pond sparked outrage across social media sites.1 The video shows the cat being thrown into a pond surrounded by high bamboo fences which made it impossible to escape. Spectators watched as the cat desperately tried for several minutes to escape. In the end, the cat was eaten alive by several crocodiles. While this was illegal, similar actions are carried out legally in many parts of the world.

Some zoos allow visitors to pay money to feed live animals to predators such as lions. According to a study conducted by students and teachers from several Beijing universities, there are two types of live feeding activities.2 One involves selling small animals that visitors can feed to predators. The other is a type of show in which a horse, ox, chicken, or rabbit is set loose in a predator’s cage.

Many people might think the people running these zoos have more disregard for nonhuman animals than in other places in the world. However, attitudes towards nonhuman animals are not that different in zoos around the world. Until recently, an Iranian zoo in the city of Sari sought to attract more visitors by feeding a live donkey to its lions every Thursday.3 Videos of the feedings posted on YouTube angered viewers, and caused the zoo to stop the practice back in 2012.

Similar disregard can be seen in the killing of animals born in zoos. In February of 2014, a healthy young giraffe was killed at the Copenhagen Zoo because he did not have the genes the zoo was interested in for their conservationist program.4 His body was dissected in front of a large crowd and some of his flesh was fed to the lions. A zoo in Zurich, Switzerland outraged many for its practice of killing “excess” deers and boars and serving them at the park’s restaurant.5 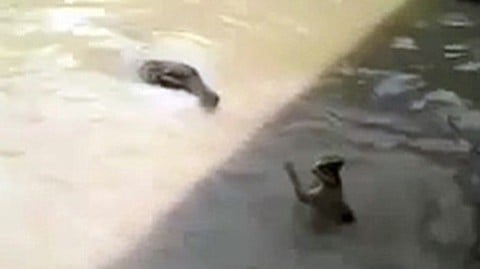 Alligator attacks cat who was intentionally thrown into lagoon

Reactions from the public

Many people feel sympathy for live animals who are fed to carnivores, but don’t care much about animals like cows who are slaughtered for their flesh. In fact, lions are fed about 500 pounds of beef (from cows) a week.6 If the zoos were feeding zebras to lions, many people would be upset. But since cows are animals that are commonly slaughtered, it is considered acceptable. Yet there is no moral reason to oppose one form of slaughter or predation over another. The animals, regardless of their species, are harmed by it.

Humans often have other preferences about animals that are based on morally irrelevant factors. People tend to prefer larger animals to small ones, and vertebrates (like mammals and birds) to invertebrates (like octopuses, lobsters, and insects). A study conducted in Switzerland revealed that people were more likely to accept the feeding of live fishes to otters, and insects to lizards on exhibit, than the feeding of rabbits to tigers.7 This is another manifestation of speciesism. Size and looks (like cuteness) are morally irrelevant because they do not determine whether an animal can be harmed or not if we use them as food.

Some people accept the practice of feeding live animals to zoo inhabitants because it’s natural for carnivores to eat animal flesh. A survey conducted on debate.org asked whether it is wrong to feed live animals to carnivores in zoos. While 36% of participants voted yes, the majority at 64% said no. One of the top comments on the majority side made this argument: “In their natural environments, carnivores kill herbivores. The camera crews on a wide range of nature documentaries explain how they would like to save a baby gazelle from a cheetah but can’t because it’s nature.”

A survey conducted in the UK revealed similar attitudes.8 While many people opposed feeding live animals on exhibit, it was often only because they thought it might be damaging for children to see. The reason many people gave for accepting off exhibit feeding of live animals was that it was natural. Yet they are applying what they perceive as natural to an institution that does not occur in nature, and is completely controlled by humans.

The comment made on debate.org highlights a more important issue that often goes unaddressed. Saying “they can’t [help] because it’s nature” is not a defensible moral reason if what we are concerned about is the interests of animals. Just because something is natural does not mean it is justified. Rape occurs in nature too, but that doesn’t mean we should accept it. We don’t accept the “natural” suffering of sick or injured humans. We try to cure them. We may not be able to do much about lions killing cheetahs right now, but that doesn’t mean we should defend it as a good thing just because it’s natural.

What’s the alternative? Animals don’t need a certain type of food, but a certain combination of nutrients. We can learn how to feed carnivores and keep them healthy without feeding them the bodies of other animals, dead or alive. Much progress has already been made on this, as evidenced by the successful use of vegan cat food.

It’s also unnecessary to keep animals such as lions and snakes in zoos at all. Although some would argue that it’s necessary for the sake of conservation of certain gene pools, that is an argument based human preferences for what kind of animals there are in the world. If what we care about are sentient beings, then it’s the sentient individuals who matter, and not what their genetic makeup is.