2015: a retrospective of a year of activism

2015 has been an important year for Animal Ethics. After our introduction to the public in 2014, in 2015 we launched our activism in several new countries and languages.

We translated our website into two more languages, Italian and Portuguese, which has made it possible for us to reach a wider audience. We are happy to announce that our website will be also published next month in German! 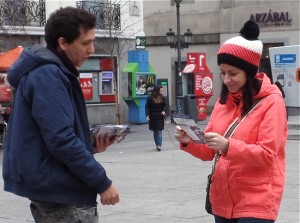 We have given talks in the US, the UK, Spain, Chile, Peru, and Argentina. We have also been tabling and leafleting regularly, reaching thousands of people. In 2016, we aim to significantly increase the number of events we carry out, as well as the amount of literature we distribute in three different areas of the world: the US, Europe, and Latin America.

We have been very active on social media, especially on Facebook, where our different pages now have a combined total of 120,000 followers, and our publications have reached millions of people. Next year, our aim is to have more than 100,000 followers on both our English and Spanish Facebook pages and to keep the number of followers growing on our pages in other languages. 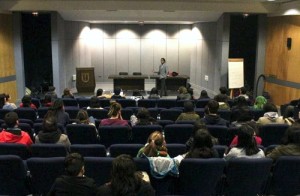 This year we also launched our 1st Animal Ethics Essay Prize on the situation of animals living in the wild and the ways to help them. We received many interesting papers, and in a few months we will announce the winner.

We’re also happy that a volume of the academic journal Relations: Beyond Anthropocentrism containing two issues was edited by two Animal Ethics activists and dedicated to the problem of wild animal suffering. This initiative together with the essay contest has helped to increase the interest in this topic and encouraged new work on it to be written and published.

Through this work, we are trying to fulfil the aim of Animal Ethics to have an impact on attitudes towards nonhuman animals and speciesism at several levels: 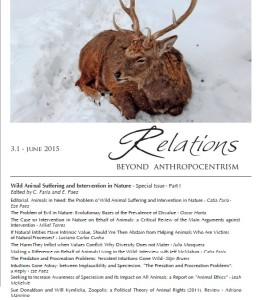 (a) For the general public, contributing to increasing the moral consideration of sentient beings.

(b) For animal activists, providing resources and information so they can increase their effectiveness in challenging speciesism.

(c) For academia, promoting research and debate among academics on this topic.

Due to all this work, and despite being a young organization, Animal Ethics was named in 2015 as an international standout charity by Animal Charity Evaluators (ACE). ACE is a nonprofit charity whose aim is to analyze the effectiveness of animal organizations throughout the world. ACE points out that:

“Animal Ethics works in a generally neglected and potentially very important area, especially with their work on wild animal issues. The part of their work that is done in academia is especially promising.”

Animal Ethics has also been recognized as a standout charity by the Swiss charitable organization Raising for Effective Giving (REG), which has also supported our work and considers us to be a “highly cost-effective” organization.

All this has been possible thanks to our activists and volunteers in different countries, and thanks to you, our supporters, who make our work possible by sharing our work and donating to Animal Ethics. We are thankful for your support. With your help, we expect 2016 to be an even more impactful year, in which we will reach many more thousands of people and make an even bigger difference for all sentient beings.