What happens to wild animals during hurricanes? 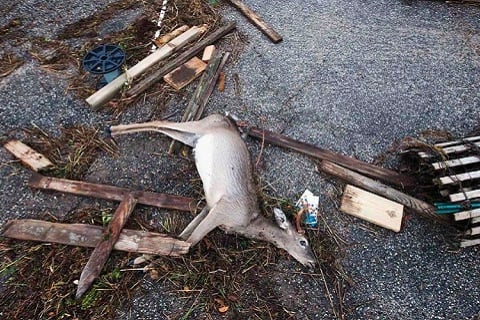 Deer victim of Hurricane Sandy in 2012, The Baltimore Sun

Many people are concerned about the fate of humans during natural disasters like hurricanes. There are many disaster relief programs that provide aid for people in times of need. For example, The American Red Cross provides resources like overnight shelters, relief item kits, health and mental health contacts, and meals. They also have Emergency Response Vehicles (ERV) that circulate affected areas to provide food, water, and other relief.1 There are government agencies in the US such as the Federal Emergency Management Agency (FEMA) that provide aid for humans, and many smaller local government and private organizations that help people prepare for and recover from natural disasters.2

But what happens to nonhuman animals? Most of the time, they are left behind. Both government and private organizations, including the Red Cross, generally refuse to help companion animals and force people to leave them behind when they are rescued. In some countries including the United States, the Red Cross does provide lists of local animal shelters, but animal shelters are usually filled to capacity even in normal times. In many places there are private groups that assist with medical care and relief for animals affected by flooding, and provide funds for food and veterinary assistance,3 but they can quickly run out of capacity, and they are not able to help in all instances, particularly in cases where urgent rescue is needed and people are forced to choose between being rescued in a dire situation and staying with their companion animals.

In the United States, there have been recent changes to federal and state law for the better. After Hurricane Katrina struck in 2005, there were so many people who refused rescue because they didn’t want to leave their dogs and cats behind that federal law was changed to make provisions for FEMA to rescue and care for animals living in human households. Some states now have similar laws.4 This helps the animals, of course, but the reason for the change was to minimize the danger to human lives. In addition to benefitting from the FEMA provisions for companion animals, New York City has made recent progress in helping animals through a combination of local laws and coordination efforts among government, private animal organizations, and private citizens. When Hurricane Sandy struck the east coast of the United States in 2012, New York City mandated that all city shelters and public transit allow animals such as cats and dogs entrance.5 Some organizations were able to provide emergency boarding facilities for displaced animals thanks to some large donations from private citizens concerned about companion animals after the hurricane. In addition to providing shelter, the Animal League provided food, water, and medical treatment, and search and rescue teams for animals were implemented.6

Unfortunately, wild animals are commonly forgotten. It is easy to forget about them because they cannot ask for help. Humans don’t typically care about wild animals the way they care about companion animals like cats and dogs. Wild animals don’t live with humans or interact with them regularly. But even if we don’t have relationships with them, the important thing to remember is that they may be suffering and in need of help.

When disasters strike, wild animals face many challenges. Destruction of homes, accidents, injuries, separation from families, dislocation, health problems from changes in habitat, and death are all challenges they face, and usually without any help. Some examples include: 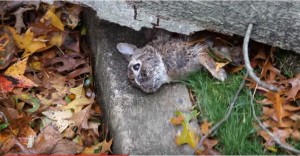 Oftentimes forest animals are hit the worst. Animals living in trees may survive the storm more often than small animals who dwell underground like rats, mice, and rabbits, who drown when the places where they live are flooded. Small animals can be the most vulnerable to being carried off by the wind and slammed against the ground or against large objects like poles. Falling debris like tree branches can crush them, as in the case of this rabbit caught in Hurricane Sandy. Forest animals can hold on to tree branches or forage in dens built in them. However, young animals can be ripped from their nests by very strong winds.7 Animal rescue centers receive many stranded baby squirrels after hurricanes because of dislocated nests.

Food sources for wild animals also get damaged. Deers can find food that falls to the ground, such as the foliage, fruits, and seeds that get dispersed by the winds. However, the food supply created from the storm can rot, making it inedible. Winds can knock over trees, snap trunks and limbs, and strip trees of foliage and fruit seeds. Birds and other animals nest in trees, or depend on them for protection from predators.8

Water birds are heavily hit during major storms. Birds that live in the woods are better at holding onto branches when the wind strikes. Woodpeckers can find shelters in the holes they nest in. Shorebirds can move inland. Seabirds and waterfowl face the most open exposure. Birds are affected by wind dislocation. During hurricanes, the eye of the storm can trap birds inside a massive wall of wind until the storm dies down, at which point they may have been carried far from home.

Other marine and aquatic mammals

Hurricanes can cause massive waves and violent action on the water’s surface. Many fishes can be killed this way. Many animals such as dolphins, manatees, fishes, and small marine invertebrates can be blown ashore. Sea turtle nests can be swept up from the beach far out into the sea. Fishes can be electrocuted by electrical lines that fall into water.9 Dune and beach damage can destroy the homes of animals such as beach mice. There can also be destruction of food sources and shelters.10

Why should we care?

We should be concerned about sentient animals because they can suffer. If you were in their position, wouldn’t you want to be helped? Most people would agree that the moral thing to do is to help humans after natural disasters. A smaller number, but perhaps still a majority, would include animals living in human homes. An even smaller number would extend this to include wild animals as well. But wild animals don’t suffer any less than domesticated animals or humans. If we are to reject speciesism, all animals should also be provided with assistance when we are able to give it.

What can be done for wild animals?

Some organizations have conservationist programs that aim at protecting wild animals in their natural habitats, but they are mainly concerned with preserving certain natural areas and view the animals who live in those areas as parts of nature. The focus should be on the interests of the sentient individuals who are harmed by the storm. There are some animal rescue organizations that also help wild animals, like Animal League. During Hurricane Ike in 2008, the Houston SPCA Wildlife Rehab & Education program took in animals like baby squirrels that were thrown from nests.11 Overall, however, the majority of organizations focus on helping animals living in human homes such as dogs and cats.

The importance of spreading concern

We don’t have the resources today to help nonhuman animals on a large scale, whenever they need help. But there are many things we could be doing now that aren’t being done in most places due to either a lack of awareness or a lack of will. We already know that many of them are viable, such as the efforts in New York City after Hurricane Sandy and existing programs that help rescue wild animals. You can help by spreading the word about the many ways nonhuman animals need our help, and about successful efforts that could be expanded and adopted in other places.

4 The American Society for the Prevention of Cruelty to Animals (2015) “What is the PETS act?”, ASPCA Professional [accessed on 3 November 2015].

11 Houston Society for the Prevention of Cruelty to Animals (2008) “Updates from animal rescue central”, houstonspca.org [accessed on 29 October 2015].