We should aid vulnerable wild animals, not kill them 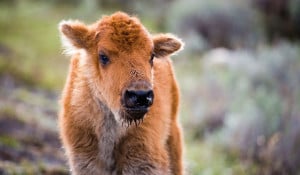 People mocked tourists at Yellowstone National Park for “anthropomorphizing” a baby bison when they put her in a car because they thought she was cold. However, many nonhuman animals die from cold weather and are often ignored. Since the bison’s parents would not touch her after she was touched by humans, she kept approaching tourists and their cars. Because she was approaching humans, the park officials killed her.

Many media organizations, like The Washington Post, are blaming the bison’s death on the tourists.[1] They ignore the fact that the bison was killed by officials. This is the side many media outlets are presenting:

“The bison’s death was the latest in a seemingly unending parade of incidents that underscore the foolishness of approaching, feeding, taking selfies with — or, in this case, trying to help — wildlife. The park’s statement emphasized that these interactions can be dangerous and illegal, and it condemned recent viral videos of people approaching bison at perilously close distances.”

If the bison’s parents would not care for her, why couldn’t she be sent to an animal sanctuary instead of being killed? Many people are outraged that this bison was killed. But they are wrong in blaming the tourists who tried to help her. Rather, it is the officials who shot them, and the people designing the policies behind the shootings, who are to blame.

There’s a view that humans should not get involved in the lives of wild animals, but this disregards the fact that wild animals are sentient individuals with needs, like us. No one would react this way if instead of a baby bison, it were a baby human who needed help. It would be appalling to kill orphans or unwanted baby humans just because they don’t have anyone to care for them.

We accept when animals are killed because we don’t think their lives are as valuable as humans. Accepting this treatment of other animals when we would never accept it on a human is speciesist discrimination. The claim that nonhuman animals considered to be wild should only live if they fit their environment and can manage to survive on their own, but not if we need to help them to survive is also speciesist. We don’t think that way either when it comes to human beings.

Besides the speciesist attitude people have toward orphaned animals, this story shows another common misconception about nonhumans. Many people and environmentalist organizations hold the misconception that animals live nice lives in the wild and that we should leave them alone. But this is not so. Untreated diseases and injuries, starvation, thirst and the inability to escape harsh weather are aspects of reality wild animals are forced to endure without relief.

We should not condemn the actions of the individuals who try to help animals. This story should be a wake-up call for the lack of aid we provide for wild animals.[3]

[2]           Stories like these shouldn’t make us forget many other real stories of wild animal rescues done by individuals which ended up saving lives. This story about a boy being punished for saving the life of a baby deer is one example: Groom, N. (2015) “Teen fights to save the life of his pet deer named ‘Rudolph’ who he rescued from the bush – as authorities claim it’s a ‘threat’ to the public and must be killed”, DailyMail, December 15 [accessed on 27 May 2016].

Torres, M. (2015) “The case for intervention in nature on behalf of animals: A critical review of the main arguments against intervention”, Relations: Beyond Anthropocentrism, 3 (1), pp. 33-49 [accessed on 11 December 2015].