Talks in the UK and Spain around International Animal Rights Day 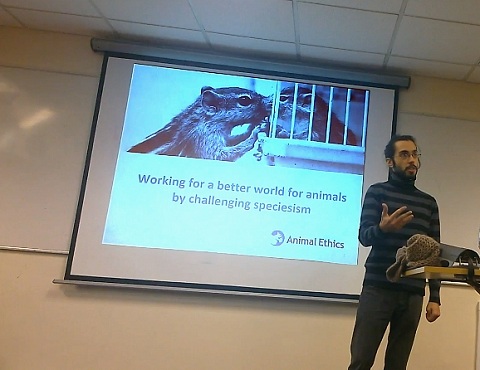 The first talk took place on December 4, at the University of Warwick in Coventry. This was our second talk in the UK, and we were glad to see a large student audience.

The second was on December 10, at the Complutense University in Madrid. It was our first talk in Spain, and it was well attended and well received. Many people, including students and members of the general public, attended the talk, and we had a lively debate afterwards.

The speakers introduced Animal Ethics to people who are unfamiliar with the organization and outlined how people can get involved. They explained how human disregard for nonhuman animals is rooted in speciesist attitudes, and why the arguments used to defend speciesism all fail.

The speakers talked about why the fact that speciesism is unjust leads to the conclusion that animal exploitation is unjustified. They also addressed the issue of animals living in the wild and the harms they suffer, which is often overlooked even by people who are concerned about animals. There are many things we can do to raise awareness about wild animal issues, and we had lively discussions after the talks about the ways we should act in defense of wild animals. 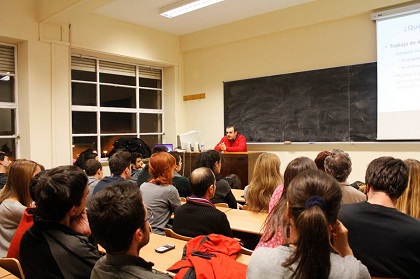 These talks coincided with the celebration, all around the world, of International Animal Rights Day. On December 10, 1948 the Universal Declaration of Human Rights was proclaimed. However, nonhuman animals are sentient, as humans are, and also need to be protected by legal rights. So this day is also used to advocate for legal rights for all sentient animals around the world.

Article 2 of the Universal Declaration of Human Rights states: “Everyone is entitled to all the rights and freedoms set forth in this Declaration, without distinction of any kind, such as race, colour, sex, language, religion, political or other opinion, national or social origin, property, birth or other status.” If we truly reject all types of discrimination, then species should be added to this list.

Article 3 of that Declaration also states that “no one shall be held in slavery or servitude; slavery and the slave trade shall be prohibited in all their forms.” Most people agree that the reason we protect humans by rights is because they can be harmed or helped by the actions of others. Yet nonhuman animals, who can also be harmed, are systematically exploited and treated as actual slaves by humans. Again, this cannot be accepted if we support the statements in this Declaration and we oppose discriminations of all forms. 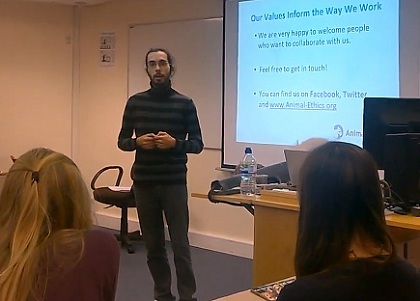 Article 25 states that humans should enjoy “a standard of living adequate for the health and well-being” they should have. Many nonhuman animals, not only those exploited by humans but also those living in the wild, face terrible threats to their lives and have to endure suffering. Taking this article seriously means we should not support the harming of animals and should support helping those in need, whether they live with humans or in the wild. This idea informs the views we present in our talks, in which we give the arguments against speciesism and in favor of caring for all sentient animals.