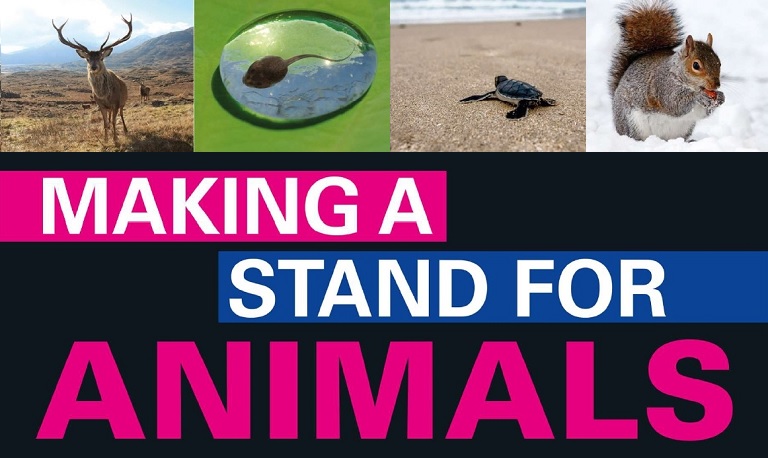 We are happy to announce that Animal Ethics’s co-founder Oscar Horta has just published Making a stand for animals, an introduction to the field of animal ethics. We believe this is one of the best and most accessible books on this topic.

The book, which was released by the academic publisher Routledge, provides an enormous amount of data, references, examples, and arguments. But it also is written in an easy to understand and enjoyable style.

The book presents the arguments why speciesism should be rejected and why sentience is what matters when it comes to respecting others. It examines the available evidence for the sentience of different animals. It describes the different ways animals are harmed by humans today, and develops a carefully argued line of reasoning to conclude that we should live without exploiting animals. In addition, it addresses the question of wild animal suffering and what can be done about it, and the reasons in support of a longtermist focus in animal activism that carefully considers effectiveness.

You can now get the book at a discounted price while at the same time supporting Animal Ethics. You can either get it for a donation of $20 or more to Animal Ethics or buy it from the publishers using a 20% off discount code, all free of shipping charges. Don’t miss it! You can find more information about these offers and about the book here.

The book has been reviewed by several animal ethics scholars and activists from around the world. They include, among others, the following:

Paola Cavalieri, the editor of The Great Ape Project, and the author of The animal question and The death of the animal has described the book as “clearly written, powerfully argued and thoroughly researched” and pointed out that it “launches a major challenge to the current speciesist paradigm”.

Lu Shegay, the managing Director of the Institute of Animal Law of Asia, has praised it as “a powerfully written and easily read book”.

Angela Martin, of the University of Basel, Switzerland, has said it is an “excellently argued book”, and “a must-read for anyone interested in the question of what we owe to animals.”

Steve Sapontzis, professor emeritus, California State University, USA, and author of Morals, reason, and animals, has said its arguments are “creative, inspirational, and well-formulated to catch the attention”.

Alexandra Navarro, from the National University of La Plata, Argentina and Director of the Latin American Institute of Critical Animal Studies, has said about it that it is as “an inspiring and ideal book to recommend”, “written in an agile and easy-to-understand way”, and that it is “definitely, a book not to be missed”.

Adewale O. Owoseni, from the University of Ibadan, Nigeria, has qualified the book as “convincingly lucid and accessible”, and “an interesting and compelling read that rejuvenates the pursuit of hope for nonhuman animals”.

Kyle Johannsen, from Trent University, Canada, and author of Wild animal ethics, has said that “the animal rights movement needs this book”, and indicated that it makes “a powerful case for ending the exploitation of domesticated animals” and that “it’s also the first book of its kind to seriously discuss the incredibly important problem of wild animal suffering”.

Jens Tuider, the International Director of ProVeg, has said it is a “highly recommended”, “accessible and witty” book, that makes “a compelling argument for expanding our moral circle to include all sentient beings” and that “aims to inspire real-life change towards a better world”.

Núria Almirón, from the Universitat Pompeu Fabra, Spain, has praised it as “a stimulating and illuminating introduction to animal ethics”, and as “highly accessible and engaging reading”.

Steven P. McCulloch, from the University of Winchester, UK has pointed out that the book “combines the logic of a professional philosopher with the engaging style of a work of fiction” and that its “arguments are lucid and compelling”.

Jeanette Rowley, Founder of the International Vegan Rights Alliance, has praised it for having “a clear writing style, logical structure and plenty of useful citations”, saying it will introduce and inspire a wide range of new readers to this important subject”.