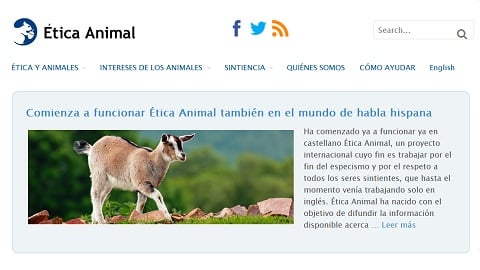 Animal Ethics has started to work in Spanish! We aim to reach a wider audience, and to spread the debate about speciesism everywhere we can. Our website is now in Spanish as well as English. We have Spanish Facebook and Twitter accounts as well.

Earlier this month, on October 4th a spokeperson from Animal Ethics, Oscar Horta, gave a talk in Chile’s capital Santiago. He presented the arguments against speciesism and the basics of animal sentience, as well as some important tips to bear in mind when defending nonhuman animals. The talk was set up by the Chilean animal organization EligeVeganismo (“Choose Veganism”) where Animal Ethics in Spanish was presented for the first time. Horta explained the aims of Animal Ethics and the work we do to challenge speciesism and to support the work other organizations do for sentient animals.

Soon we will be giving more talks in both the English and the Spanish speaking world in order to introduce Animal Ethics and to to raise awareness about the discrimination of nonhuman animals.