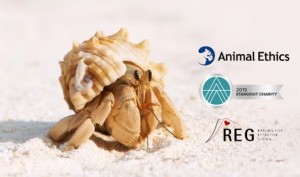 We’re honored that Animal Ethics was reviewed by Animal Charity Evaluators (ACE) and was designated a Standout Charity internationally. We’re also honored to announce that the organization Raising for Effective Giving (REG) considers us a Standout Charity too.

ACE is a nonprofit charity aimed at analyzing the effectiveness of animal charities throughout the world. ACE points out that,

“Animal Ethics works in a generally neglected and potentially very important area, especially with their work on wild animal issues. The part of their work that is done in academia is especially promising.”

This is great news, especially since we’re a young organization. In their report, ACE evaluates both our strengths and weaknesses. We’re happy that they’ve been rigorous in their examination, so we can do even better activism in the future. You can read the details in ACE’s Animal Ethics Review.

REG describes itself as an organization that tries to “think rationally about global challenges” and to be as effective as possible to reduce suffering. They also collaborate with researchers, think tanks and charity evaluators. That’s why we’re pleased REG has chosen us as a Standout Charity too. REG has Animal Ethics in a list of top world charities working in several areas. They consider us, among others, to be a “highly cost-effective” organization. REG points out that Animal Ethics works “providing information and promoting discussion and debate about issues in animal ethics, and providing resources for animal advocates.”

We will continue to work as effectively as we can and to keep expanding our work. We try to learn and refine what we do based on our experience and the best research available. We’re always prepared to improve any aspect of our work that can lead us to do more good for all sentient beings!