One of the ways nonhuman animals are exploited is to be used as workers. Many animals are forced to do physical labor. They are used as a means of transport, to pull plows, carry goods, and to power mills. Others are used as police dogs, or guide dogs.

Some people may think that animals enjoy carrying out these tasks, and that they benefit from being used in these ways. But this supposition does not hold for the following reasons.

Jobs for which nonhuman animals are used are often tiresome and may cause physical pain, such as when the animals have to carry heavy loads or they are hit with whips or other objects to make them run, carry weight or perform some other type of work. In addition, they are caused stress and unhappiness by the tedium of their activities, and fear and anguish at the punishment or the tasks they face. In fact, it is very common for them to be exploited to death. So-called beasts of burden die from exhaustion during their work, or they are killed because they can’t work any more.

There may be specific cases in which some animals enjoy performing certain activities for which they are used, but these are exceptions, and such uses of animals still occur within a framework of exploitation that harms them in other ways. When working animals are no longer able to work well, they are often killed and replaced. In addition, the animals are usually bred for a specific purpose. As part of the breeding process, mothers are often confined in places where they suffer from loneliness and boredom, and their children are separated from them, which may occur when the children are just a couple of months old. This makes both the children and the mothers suffer. The animals may not be fed or housed well, or given health care because it might be more economical to replace them if they die rather than taking care of them. All of this occurs because those who use animals do it for a profit.

As with human exploitation, those who use animals for work take advantage of the animals’ effort and suffering for their own benefit. The fruits of the animals’ labor does not benefit the animals themselves. Even if working animals are given certain measures of care, the animals lose much more than they gain from being used as laborers.

The activities work animals perform can be stressful, dangerous, and sometimes lethal. This is not the case only for police dogs and animals used in the military. Many other animals, such as those used for transport, risk injury and death. They also face the risk of accidents. If they suffer major injuries, they are usually killed. 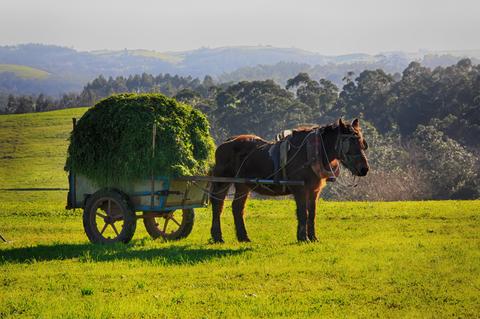 Animals used for transportation and for traction

Domesticated animals who are used to provide transportation and perform traction (such as pulling carriages or plows) are generally known as “draft animals.” Animals are employed in this manner by people in many countries.

There are several ways humans use animals for traction: hooking the animals up to carriages, making them provide traction for agricultural tools (such as plows), using them as animal engines in windmills and waterwheels (sometimes referred to as “blood mills”), and using them for exhibitions. Horses are ridden with a saddle, used to pull carriages, and used as forced labor in agricultural production.

In many places the use of horses for transportation is a tourist attraction, which is a similar form of exploitation to that of other domesticated animals used for work. In addition, horses spend a lot of time tied up, when they are waiting for customers or during hours when they aren’t working. They are put in dangerous situations in traffic, and may suffer serious injuries if they are hit by cars.1

In addition to horses, other animals are used in different places for traction activities:

The ways in which animals are harmed by this exploitation are diverse.

They often suffer beatings and other forms of aggression to make them work.

They often work in harsh environments, which may be extremely hot or cold and in which they may be greatly overworked.

The work itself often causes health problems. The correlation between the work, the way the animals live, and the state of their health is evident.2 Unfortunately, adequate veterinary care and limiting the hours that animals can work is less economical than replacing animals as they age or become debilitated. The interests of the animals are commonly disregarded for economic reasons. Animals who can no longer work are often sent to a slaughterhouse, even when they could have continued to live without working for many years.

There are, however, alternatives to the use of animals as a work force. Most are pretty obvious, such as the development and use of vehicles instead of animals. The use of tractors and other motorized vehicles is widespread in agriculture. Bicycles are an alternative that have been widely used for more than a century in rural and urban environments alike. Cars, motorcycles, trains and buses are means of transport that don’t use animals.

It is possible and necessary to end the use of animals as a means of transport, and replace them with vehicles. Even in places where such exploitation is traditional, there are alternatives. For example, in Medellin, Colombia, cargo bikes were provided to those who had previously used horses to collect debris after the use of horses was prohibited. The same substitutions can be made around the world to move toward a society free from animal exploitation.

Use of animals by police and security guards

Throughout the world, dogs are used by police officers and security guards. Sometimes the dogs suffer or die due to aggression or negligence by those who use them. During training, and as punishment once trained, the animals may suffer attacks that cause them pain and psychological suffering.3 In addition, law enforcement activities put the animals at serious risk for injuries, health problems, and accidental death. The wellbeing of the dogs is usually considered less important than the job they are used for, so the lives of dogs are often put in danger during arrests.

Dogs used by security guards are often forced to wear a muzzle several times a day, and they may suffer due to the stress of being in crowded places. It is also common for police officers to use horses as a means of transport. The horses are forced to spend many hours at a time walking without rest, and they suffer the effects of adverse weather conditions. Sometimes horses are used in police charges against demonstrators, and the horses may be injured as a result.

Use of dogs as guides

Another way animals are used today is as guides for blind people, or people with severe sight problems. We should all be sensitive to the serious problems faced on a daily basis by these individuals, resulting not only from their physical circumstances, but also from the discriminatory ways they are often treated and the lack of support they receive from the institutions of society. In the same vein, we should not discriminate against nonhumans in order to help people with functional diversity meet the challenges they face.

The solution is for society to allocate the necessary resources for people with disabilities to lead lives without the constraints they face today, and to do this without exploiting nonhuman animals or other people.

How can severely sight-disabled humans be served without the exploitation of nonhuman animals? With today’s resources, the development and promotion of technology can be pursued by a society that chooses not to exploit nonhuman animals. Also, people can be employed (and volunteer) as guides for the disabled.

The use of GPS technology as assistance for the blind was introduced in the late 1980s.4 Some of the systems developed to date are Loadstone GPS, Wayfinder Access, Trekker, BrailleNote GPS and Mobile GEO. Through these systems, blind people can find where they are and which direction to go to reach their destination. There are also projects to develop vehicles suitable for the blind, like the Blind Driver Challenge.5

So-called “guide dogs” are animals selected for their willingness to obey, even in situations where they are suffering.6 They have been trained to assist blind or partially sighted people in their daily lives. Breeders of guide dogs choose breeds whose characteristics make them most suitable to be used as guides. When they are just a few weeks old, guide dogs are brought to so-called “education families”, separating them from their mothers.

When the dogs are one year old, they are abruptly separated from what have been their families and taken to a training center, which can be a traumatic experience.

In the training centers, the trainers instill certain patterns of behavior, teaching the dogs the places they should walk and how they should react in various situations. After that, the dogs begin to live with blind or visually impaired persons.

At some point dogs may no longer be able to work. This may happen when guide dogs become older, or if they get a disease or suffer an accident that prevents them from performing expected tasks. In such cases they might be killed or brought to a kennel. This is not always the case, but it is perfectly legal, and it does happen sometimes. The fact that the dogs have worked for their owners for many years does not necessarily mean that they will be taken care of after they are no longer useful.

Gardiner, J. (2006) The animals’ war: Animals in wartime from the First World War to the present day, London: Portrait.